The UCF Police Department has worked tirelessly to build trust between law enforcement and the community we serve. Our sworn and civilian staff hold themselves to the highest standards, and we will continue to always “Do the Right Thing.”Our officers will treat everyone with dignity and respect, and we pledge to treat others with utmost professionalism. Our trainings in fair and impartial policing, bias-free policing, procedural justice, and other areas have helped UCFPD officers become better public servants and help us protect and serve in an unbiased manner.We remain committed to listening, learning and growing alongside our community. We are a stronger UCF when we stand together.

We’ve heard the feedback from students, faculty and staff, and the overwhelming theme is action. We’ve created a list of short- and long-term goals and plan to expand this list following future discussions with our community.

Review #8CantWait
UCFPD has implemented #8CantWait recommendations for reducing police use of force as part of a renewed commitment to de-escalation.

Revise Policies and Practices
Since 2015, the UCF Police Department has been revising their policies and practices, incorporating many of the 21st Century Policing task force’s recommendations and action items, which provided guidance for how a department can strengthen trust within their communities, while also lowering crime.

Updated Training
By July 15, all sworn and civilian UCFPD employees will be required to complete Harvard’s Project Implicit bias test and modules within the Smithsonian National Museum of African American History and Culture’s newly launched “Talking About Race” online portal.

Hiring and Background Process
UCFPD will be adopting additional screening of biases during our hiring and background check processes.

Implicit Bias Training Officer
UCFPD will send an officer to an upcoming implicit bias “train the trainer” course so that new officers can receive this training immediately upon beginning their onboarding with UCFPD, without having to wait for a local offering of the course to be available.

Educational Opportunities
UCFPD has made a long-term commitment to send officers each year to Washington, D.C., to experience the National Museum of African American History and Culture.

UCFPD has long said our sworn staff should mirror the community they serve.

UCFPD opened a Community Outreach Center in the Student Union in 2019. Officers from the Community Partnerships Unit met with campus partners ahead of the opening to explain what the purpose of the space was for: To keep the Union safe and allow our community to meet and engage with officers. This space is regularly used for walk in questions and for group training with officers about community engagement and partnerships.

We invite members of the UCF community to participate alongside our officers in training about recognizing bias and acting with fairness in all interactions.

Green Dot is a bystander intervention training program that aims to reduce power-based personal violence on campus by training students, faculty and staff how to become active bystanders.

The UCF Police Department is grounded in its policies, which direct officers and staff on how they are expected to conduct themselves while representing themselves as UCF Police employees. These policies are extremely detailed and outline what’s expected, along with the consequences if the policy is not followed.

There are certain situations that may require officers to use force. These policies are extremely strict, and all use-of-force scenarios are reviewed by peers and UCFPD leadership. This policy clearly states that it is imperative to value and preserve human life, and use of force may only be used until the incident is under control. UCFPD officers do not carry rubber bullets or tear gas, and our policy does not allow neck restraints.

UCFPD is committed to protecting individuals’ rights to peacefully assemble and protest, and we are out there to keep our community safe. The UCF Police Department’s Emergency Response Team — a specialty group of officers trained in crowd management — may be deployed to support outside agencies or support large events on campus.

The UCF Police Department was one of the first agencies in Central Florida to implement the use of body cameras. Now, UCFPD has upgraded body cameras to activate when officers turn on the lights on their vehicle or remove a gun or taser from their holster, removing the element of human error in a quickly evolving situation.

UCFPD’s Emergency Response Team is a group of officers who are specially trained in de-escalation and crowd management. These officers are often deployed for large events on campus, or to support other agencies when large gatherings are expected.

Racial and ethnic profiling is unacceptable, especially in law enforcement. The UCF Police Department is charged with protecting the constitutional rights of all citizens within the university community, regardless of race, color, ethnicity, sex, sexual orientation, physical disability, religion, age, cultural group, economic status or other belief system.

UCFPD’s Response to Resistance policy calls for officers to treat everyone fairly and humanely, and our Duty to Intervene policy was recently updated to expand on those priniciples. UCFPD is committed to doing the right thing, and we expect our officers to speak up when they believe a colleague is acting inappropriately.

To celebrate diversity and inclusion, UCFPD encourages officers to become a part of the campus community by joining groups on campus they are passionate about. This helps our officers connect with those on our campus, and ultimately serve them better as police officers.

Bianca Becker
Officer Bianca Becker, a patrol officer with UCFPD since 2017, has proved she is always eager to learn and help the community she serves. Along with volunteering as the LGBTQ+ liaison for UCFPD, Becker also volunteered to serve at the new UCF Downtown campus to gain new experiences in an urban environment. A UCF graduate herself, she is always one of the first officers to volunteer at community events like Coffee With a Cop.

Ashley Gonzalez-Montanez
Officer Ashley Gonzalez-Montanez recently volunteered as the LGBTQ+ liaison when the opportunity presented itself, and she is excited to fulfill the role. She joined the UCF Police Department in 2017, after completing the Law Enforcement Academy with fellow LGBTQ+ liaison Bianca Becker. A UCF alumnae, she’s received multiple awards for going above and beyond to help her community, including buying a homeless student a new pair of shoes.

Monica Quimbayo
Officer Monica Quimbayo just started at the UCF Police Department in January 2020, but she certainly has a lot of law enforcement experience under her belt. Before joining UCFPD, the University of Florida alumnae was a former deputy with the Brevard County Sheriff’s Office and officer at the Gainesville Police Department. When being sworn in at UCFPD, she said how excited she was to police in a campus environment. By volunteering as an LGBTQ+ liaison for UCFPD, Quimbayo hopes to meet members of the community she serves, and offer resources and support.

Peter Osterrieder
In 2020, Chief Carl Metzger instituted an agency award to recognize an officer who goes above and beyond to create relationships and partnerships with those who are committed to diversity and inclusion. Sergeant Peter Osterrieder was the first recipient of this award for his work with UCF’s Community Partnerships Unit and helping to establish the Community Outreach Center.

The #UCFAlert text and email message system will be used to keep the university community notified of severe weather threats. 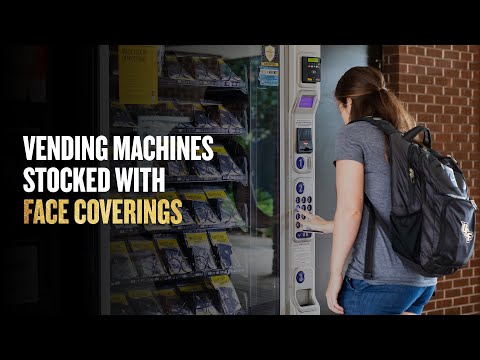 Each student, faculty and staff member is allotted one free washable cloth mask, which can be obtained through a vending machine or at one of…

Student Health Services’ Michael Deichen provides guidance for the campus community about COVID-19 testing, which is available on UCF’s main and medical campuses.

Individuals with a valid UCF ID can pick up one, free cotton reusable face covering at either of the two campuses, with future distribution coming…

About UCFPD
UCFPD is an accredited, full-service law enforcement agency that currently employs more than 85 sworn officers who provide police services on the main and regional campuses, as well as at several university-affiliated housing communities.
Learn more about our accreditation.