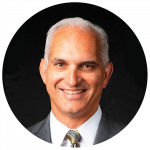 Terry Mohajir, the University of Central Florida’s new vice president and director of athletics, has excelled at hiring coaches who win championships, raising the money for first-class athletics facilities and support resources necessary to be nationally competitive, and fulfilling a promise to guarantee a job or graduate school admission for every student-athlete who graduates.

Mohajir (pronounced MO-HODGE-ER), most recently Arkansas State University’s vice chancellor for intercollegiate athletics, is one of 13 members of the College Football Playoff Selection Committee, and he was named one of the top five non-Power 5 athletic directors in the nation by Stadium.

He is known for hiring innovative, offensive-minded football coaches, and has established a variety of leadership and professional development programs for student-athletes, including creative offerings such as faculty-led study abroad programs.

While at Arkansas State, Mohajir’s accomplishments include:

Mohajir, who was a starting safety on Arkansas State’s football team and an assistant football coach at the University of Kansas, will aim to build on UCF Athletics’ accomplishments, including: