Even the new remote-sensing technologies, so effective in recent decades at surveying other archaeological sites, were no help. Imaging radar and multispectral surveys by air and from space could not “see” through the trees.

Then, in the dry spring season a year ago, the husband-and-wife team of Arlen F. Chase and Diane Z. Chase tried a new approach using airborne laser signals that penetrate the jungle cover and are reflected from the ground below. They yielded 3-D images of the site of ancient Caracol, in Belize, one of the great cities of the Maya lowlands.

In only four days, a twin-engine aircraft equipped with an advanced version of lidar (light detection and ranging) flew back and forth over the jungle and collected data surpassing the results of two and a half decades of on-the-ground mapping, the archaeologists said. After three weeks of laboratory processing, the almost 10 hours of laser measurements showed topographic detail over an area of 80 square miles, notably settlement patterns of grand architecture and modest house mounds, roadways and agricultural terraces.

“We were blown away,” Dr. Diane Chase said recently, recalling their first examination of the images. “We believe that lidar will help transform Maya archaeology much in the same way that radiocarbon dating did in the 1950s and interpretations of Maya hieroglyphs did in the 1980s and ’90s.”

The Chases, who are professors of anthropology at the University of Central Florida in Orlando, had determined from earlier surveys that Caracol extended over a wide area in its heyday, between A.D. 550 and 900. From a ceremonial center of palaces and broad plazas, it stretched out to industrial zones and poor neighborhoods and beyond to suburbs of substantial houses, markets and terraced fields and reservoirs. 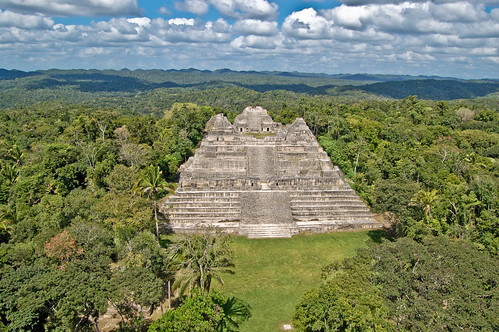 This picture of urban sprawl led the Chases to estimate the city’s population at its peak at more than 115,000. But some archaeologists doubted the evidence warranted such expansive interpretations.

“Now we have a totality of data and see the entire landscape,” Dr. Arlen Chase said of the laser findings. “We know the size of the site, its boundaries, and this confirms our population estimates, and we see all this terracing and begin to know how the people fed themselves.”

The Caracol survey was the first application of the advanced laser technology on such a large archaeological site. Several journal articles describe the use of lidar in the vicinity of Stonehenge in England and elsewhere at an Iron Age fort and American plantation sites. Only last year, Sarah H. Parcak of the University of Alabama at Birmingham predicted, “Lidar imagery will have much to offer the archaeology of the rain forest regions.” 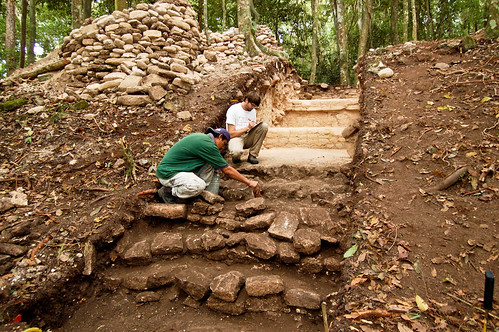 The Chases said they had been unaware of Dr. Parcak’s assessment, in her book “Satellite Remote Sensing for Archaeology” (Routledge, 2009), when they embarked on the Caracol survey. They acted on the recommendation of a Central Florida colleague, John F. Weishampel, a biologist who had for years used airborne laser sensors to study forests and other vegetation.

Other archaeologists, who were not involved in the research but were familiar with the results, said the technology should be a boon to explorations, especially ones in the tropics, with its heavily overgrown vegetation, including pre-Columbian sites throughout Mexico and Central America. But they emphasized that it would not obviate the need to follow up with traditional mapping to establish “ground truth.”

Jeremy A. Sabloff, a former director of the University of Pennsylvania Museum of Archaeology and Anthropology and now president of the Santa Fe Institute in New Mexico, said he wished he had had lidar when he was working in the Maya ruins at Sayil, in Mexico.

The new laser technology, Dr. Sabloff said, “would definitely have speeded up our mapping, given us more details and would have enabled us to refine our research questions and hypotheses much earlier in our field program than was possible in the 1980s.”

At first, Payson D. Sheets, a University of Colorado archaeologist, was not impressed with lidar. A NASA aircraft tested the laser system over his research area in Costa Rica, he said, “but when I saw it recorded the water in a lake sloping at 14 degrees, I did not use it again.”

Now, after examining the imagery from Caracol, Dr. Sheets said he planned to try lidar, with its improved technology, again. “I was stunned by the crisp precision and fine-grained resolution,” he said.

“Finally, we have a nondestructive and rapid means of documenting the present ground surface through heavy vegetation cover,” Dr. Sheets said, adding, “One can easily imagine, given the Caracol success, how important this would be in Southeast Asia, with the Khmer civilization at places like Angkor Wat.”

In recent reports at meetings of Mayanists and in interviews, the Chases noted that previous remote-sensing techniques focused more on the discovery of archaeological sites than on the detailed imaging of on-ground remains. The sensors could not see through much of the forest to resolve just how big the ancient cities had been. As a consequence, archaeologists may have underestimated the scope of Mayan accomplishments.

For the Caracol survey, the aircraft flew less than a half-mile above the terrain at the end of the dry season, when foliage is less dense. The Airborne Laser Terrain Mapper, as the specific advanced system is named, issued steady light pulses along 62 north-south flight lines and 60 east-west lines. This reached to what appeared to be the fringes of the city’s outer suburbs and most agricultural terraces, showing that the urban expanse encompassed at least 70 square miles.

Not all the laser pulses transmitted from the aircraft made it to the surface. Some were reflected by the tops of trees. But enough reached the ground and were reflected back to the airborne instruments. These signals, measured and triangulated by GPS receivers and processed by computers, produced images of the surface contours. This revealed distinct patterns of building ruins, causeways and other human modifications of the landscape.

The years the Chases spent on traditional explorations at Caracol laid the foundation for confirming the effectiveness of the laser technology. Details in the new images clearly matched their maps of known structures and cultural features, the archaeologists said. When the teams returned to the field, they used the laser images to find several causeways, terraced fields and many ruins they had overlooked.

The Chases said the new research demonstrates how a large, sustainable agricultural society could thrive in a tropical environment and thus account for the robust Maya civilization in its classic period from A.D. 250 to 900.

“This will revolutionize the way we do settlement studies of the Maya,” Dr. Arlen Chase said on returning from this spring’s research at Caracol.

Lidar is not expected to have universal application. Dr. Sheets said that, for example, it would not be useful at his pre-Columbian site at Cerén, in El Salvador. The ancient village and what were its surrounding manioc fields are buried under many feet of volcanic ash, beyond laser detection.

Other modern technologies, including radar and satellite imaging, are already proving effective in the land beyond the temples at Angkor, in Cambodia, and in surveys of the Nile delta and ancient irrigation systems in Iraq.

Laser signals breaking through jungle cover are only the newest form of remote sensing in the pursuit of knowledge of past cultures, which began in earnest about a century ago with the advent of aerial photography. Charles Lindbergh drew attention to its application in archaeology with picture-taking flights over unexplored Pueblo cliff dwellings in the American Southwest.

NASA recently stepped up its promotion of technologies developed for broad surveys of Earth and other planets to be used in archaeological research. Starting with a few preliminary tests over the years, the agency has now established a formal program for financing archaeological remote-sensing projects by air and space.

“We’re not looking for monoliths on the Moon,” joked Craig Dobson, manager of the NASA space archaeology program.

Every two years, Dr. Dobson said, NASA issues several three-year grants for the use of remote sensing at ancient sites. In addition to the Caracol tests, the program is supporting two other Maya research efforts, surveys of settlement patterns in North Africa and Mexico and reconnaissance of ancient ruins in the Mekong River Valley and around Angkor Wat.

Nothing like a latter-day Apollo project, of course, but the archaeology program is growing, Dr. Dobson said, and will soon double in size, to an annual budget of $1 million.

Source: The New York Times, Mapping Ancient Civilization, in a Matter of Days, by John Noble Wilford, May 10, 2010

5 UCF Scholars to be Inducted into Academy of Science, Engineering and Medicine of Florida

New Habits for the New Year

My Name Is Ren